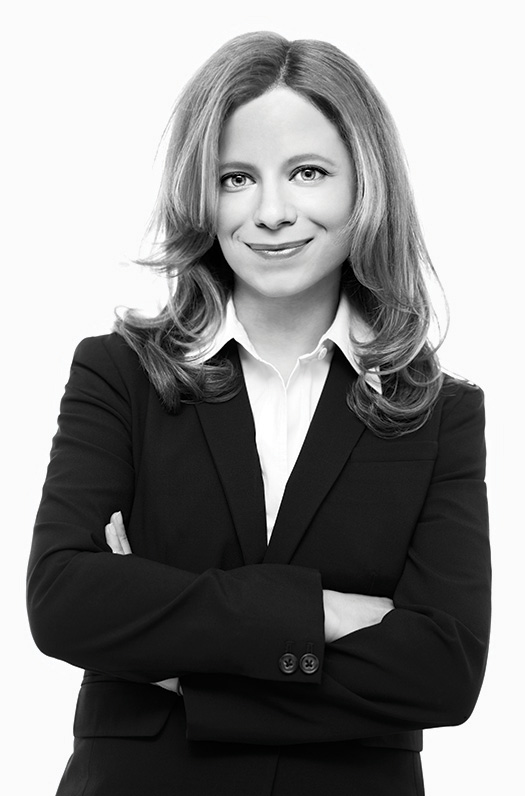 Caren Decter is a partner in the Litigation Group, focusing on commercial and intellectual property litigation, and white collar defense. Named to Benchmark Litigation’s 2019 and 2021 40 & Under Hot List and listed as a 2022 Super Lawyer by Super Lawyers magazine, Ms. Decter represents clients in civil and criminal matters pending in state and federal courts around the country.

Clients benefit from her skill in managing complex litigation aggressively and efficiently, as well as her responsiveness and ability to forge creative solutions to complicated problems before they grow into drawn-out litigation.

Ms. Decter takes on significant pro bono matters. The Anti-Defamation League awarded Ms. Decter and several of her colleagues the Edward Brodsky Founders Award in recognition of their work on an amicus brief arguing against President Trump’s travel ban.

Ms. Decter is on the Board of Directors for the New York County Lawyers Association and a member of the Federal Courts Committee of the NYC Bar Association. Prior to joining Frankfurt Kurnit, Ms. Decter was an attorney with Willkie Farr & Gallagher LLP, where she represented clients in complex commercial litigations. She also spent a year clerking for the Honorable Colleen McMahon, Judge of the United States District Court for the Southern District of New York.

DOC NYC | Warhol Foundation vs. Goldsmith: A New Test for “Fair Use” By Filmmakers?

The Business of Art

Caren Decter joins panelists to discuss how to enter and navigate the art world during a Washington University alumni event. More information here.

From NFTs to Andy Warhol to New Legislation: Current Developments in Copyright

Caren Decter speaks on “Disability & Inclusion—Marketing & Legal Considerations” during an Internationalist Roundtable Discussion. Listen to the podcast here or watch on YouTube here.

Ensuring that your website, mobile applications and social media are accessible to persons with disabilities is not only a sign of inclusion and good corporate citizenship: it’s also a legal requirement. This webinar will provide an update on the legal landscape and tips to ensure your digital presence meets current legal standards for accessibility. Read more.

Does your business depend on copyright ownership and licensing, or rise and fall with changes in copyright law? Do you use content created by others or worry that your content is going to be stolen? Are you susceptible to copyright claims from third parties or trolls? If so, please join us remotely for part two of the Frankfurt Kurnit CLE (CA & NY credit) update on current hot topics in copyright law. (Note: part one is not a prerequisite for part two.) Read more.

Hot Issues in Patent, Trademark and Copyright Law in the Federal Courts

Amici: How a Painting of Prince Could Threaten Documentary Filmmaking

Law Dork speaks with Caren Decter about the Andy Warhol Foundation for the Visual Arts, Inc. v. Lynn Goldsmith case and why documentary filmmakers are focused on the case. Read more.

On March 18, 2022, the Department of Justice ("DOJ") published guidance on website accessibility. The guidance focuses on how state and local governments (Title II of the ADA) and “public accommodations” (Title III of the ADA) can remove unnecessary barriers that make it difficult or impossible for people with disabilities to use websites. Read more.

Caren Decter is named to Benchmark Litigation’s 40 & Under Hot List for 2021. View Article

Caren Decter is named to Benchmark Litigation’s 40 & Under Hot List for 2019.

Law360 mentions Caren Dector as counsel to an injured worker in a lawsuit against Home Depot and its subcontractor Bryan’s Home Improvement Corp. (Behind paywall) View Article

Plaintiffs have filed thousands of lawsuits (including class actions) alleging that commercial websites are not accessible to the blind or visually impaired in violation of the Americans with Disabilities Act of 1990 (the “ADA”) and corresponding state laws. Read more.

Are You Ready for the New York Cybersecurity Regulations’ September 3rd Deadline?

Financial institutions and insurance companies operating in New York have until September 3, 2018 to comply with the next phase of New York's Cybersecurity Regulations. Here's what you need to know to avoid regulatory scrutiny. Read more.

We filed a friend-of-the-court brief in the United States Supreme Court on behalf of our client, the Anti-Defamation League, and other civil rights organizations, in support of Hawaii’s challenge to President Trump’s Executive Order titled “Protecting the Nation from Foreign Terrorist Entry into the United States.” John B. Harris led the Frankfurt Kurnit drafting team that included Caren Lerner Decter, Jeremy S. Goldman and Rayna S. Lopyan. View Article

The New York Law Journal mentions Caren Decter as attorney for Francis Canellas, a key witness in the case arising from the collapse of Dewey & LeBoeuf.

The Anti-Defamation League (ADL) awarded our law firm the Edward Brodsky Founders Award in recognition of our work for the ADL in the Trump “travel ban” cases. Bloomberg BNA and The New York Law Journal summarized our amicus brief arguments, covered our award, and explained how our brief came together.

The ADL New York region is presenting Frankfurt Kurnit with an award for our pro bono efforts in opposing the immigration ban. The award will be given at ADL’s annual meeting on Tuesday, June 20, 2017 at the Jewish Museum, 1109 5th Avenue.

We filed a friend-of-the-court brief on behalf of our client, the Anti-Defamation League, in support of Washington and Minnesota’s challenge to President Trump’s Executive Order titled “Protecting the Nation from Foreign Terrorist Entry into the United States.” You can read our brief here.

Forfeiture and Restitution: Ships Passing in the Night?

The New York Law Journal published Brian Maas and Caren Decter’s essay about the disconnect between the government’s forfeiture powers and a victim’s right to restitution. (Article behind paywall) View Article

Yesterday a New York State appeals court reinstated the conviction of a former Goldman Sachs computer programmer under New York's unlawful use of secret scientific material statute. In doing so, the court gave a twenty-first century voice to a statute that was written in the age of blueprints and photocopiers. Read more.

A Spirit of “Cooperation”: What You Need to Know About the DOJ’s New Enforcement Policies

The New York Law Journal has a page 1 story about our win for our art industry clients, David Segal and Mohamed Serry. The article quotes Brian Maas. Jeremy S. Goldman, Caren Decter, and Nicole Bergstrom were also on the team. (Article behind a paywall) View Article

Why Jewel V. Boxer is Wrong

The Foreign Corrupt Practices Act ("FCPA") was enacted by Congress in 1977 in response to "revelations of widespread global corruption", including allegations that numerous U.S. companies had paid hundreds of millions of dollars to bribe foreign government officials to obtain or retain overseas business. The FCPA includes substantial criminal penalties for both businesses and individuals found to have made prohibited payments, and also gives both the Department of Justice and the Securities and Exchange Commission the authority to pursue civil enforcement actions. Read more.

Ipfrontline featured Caren Lerner's article about how the California Resale Royalties act violated the dormant Commerce Clause of the Constitution.

Court Clears Use of YouTube-famous “Flying Rabbi” in Humor Sketch

The use of someone without permission in entertainment can trigger a lawsuit for "commercial appropriation of likeness." And so it was recently when "Jimmy Kimmel Live" created a video mocking a 2010 "business meeting" between basketball star LeBron James and a rabbi. Read more.